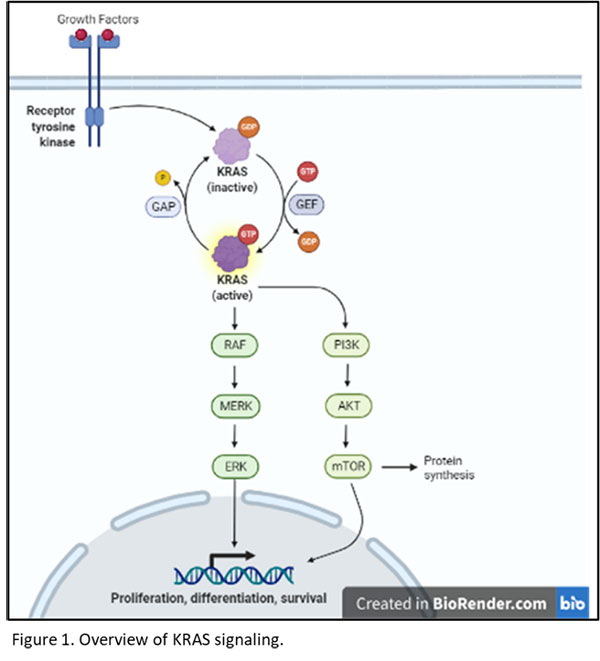 Why target KRAS in oncology research?

KRAS has become an important drug target in multiple cancers due to its central role in hypertrophic and pro-mitotic signaling. KRAS is a small GTPase that is activated in response to growth factors including HGF, TGFα, and EGF. KRAS then activates the MAP kinase (MAPK; RAF/MEK/ERK) signaling pathway, driving ERK translocation to the nucleus, and resulting in transcription of pro-mitotic and pro-growth genes. Additionally, KRAS contributes to PI3K/AKT/mTOR signaling, leading to transcriptional activation as well as hypertrophic protein synthesis via mTOR1 (figure 1).

Activating mutations in one of the three RAS genes (HRAS, NRAS, and KRAS) have been observed in up to 20% of all tumors, with mutations in the KRAS gene observed in ~90% of pancreatic cancers, ~50% of colorectal cancers, and ~25% non-small cell lung cancers (NSCLC)1. The G12D mutation is most common in pancreatic and the G12C mutation is most common in NSCLC, while many colon cancers harbor both the G12D and G13 KRAS mutations2.

Heated interest in KRAS as an anticancer target has led to the development of numerous KRAS inhibitors such as Amgen’s Lumakras (sotorasib), recently approved for the treatment of NSCLC3. Although KRAS was first described in 1983, efforts to develop clinically effective KRAS inhibitors were largely unsuccessful until recently. Production of KRAS inhibitors has been stymied by lack of consistency in methods, reagents, and protein expression systems, with many groups using truncated KRAS proteins that exhibit altered tertiary structure and lack cell membrane interactions4. Furthermore, sensitivity to KRAS inhibition is highly cell-type specific, and numerous studies indicate that inhibition at multiple points in the KRAS signaling cascade may be necessary to achieve clinically relevant effects1. Thus, patient-derived xenografts and stable cell lines expressing full length KRAS G12C, G12D, and G13 mutant proteins are required for preclinical evaluations of KRAS inhibition.

Which KRAS mutant cell lines have been successfully grafted into the SRG OncoRat®? 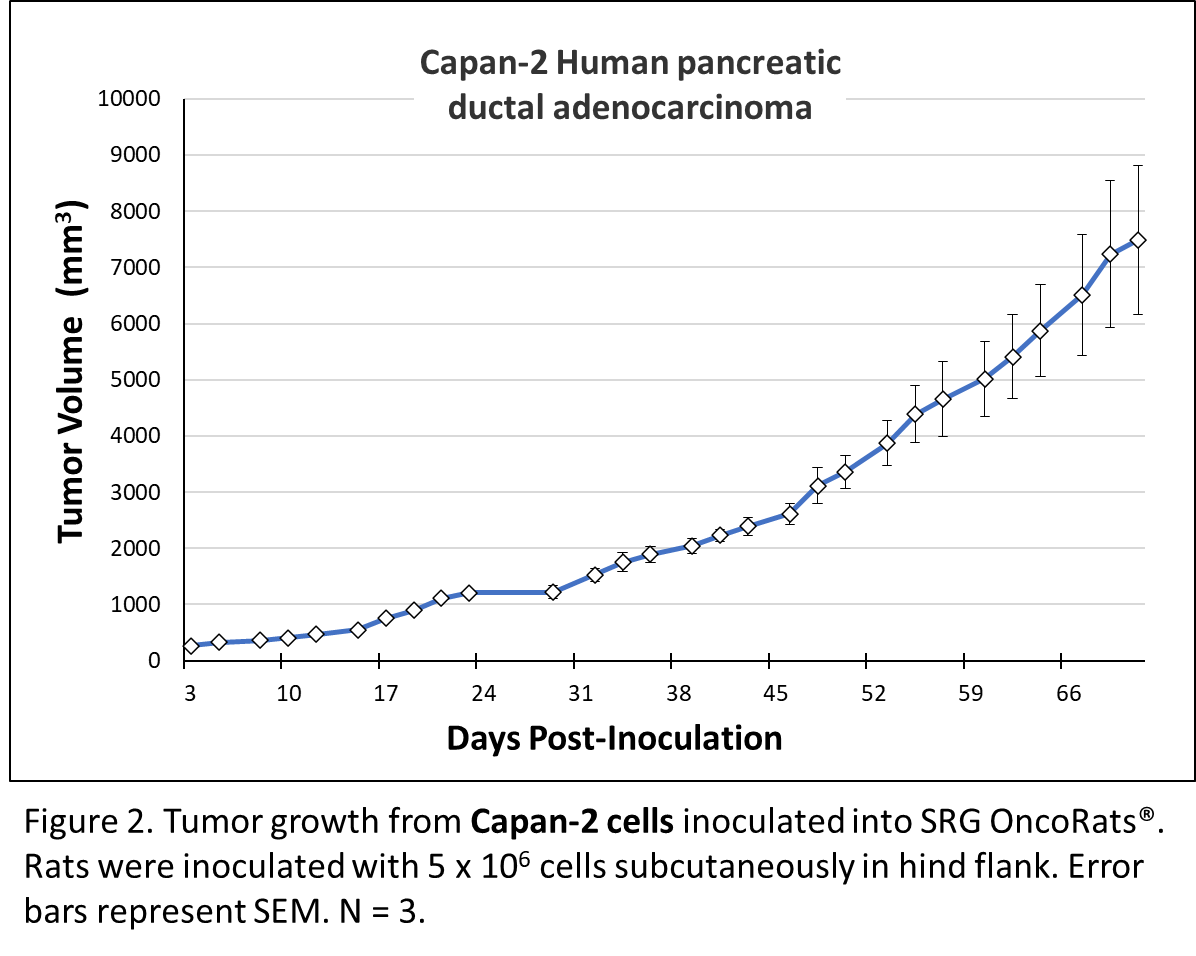 H358 NSCLC cells contain cytoplasmic structures that are characteristic of Club cells. These cells only have the KRAS G12C mutation, without any other tumor suppressor or oncogenic mutations and they are exceptionally useful for the study of KRAS, EGFR, BRAF, MEK, and ERK signaling. Despite their KRAS mutation, H358 cells are sensitive to anti-GFR therapies. These cells were derived from a metastatic site7, and our preliminary data indicate that H358 cells form metastases in the SRG OncoRat®. Tumor growth in the SRG OncoRat® is shown in Figure 3. 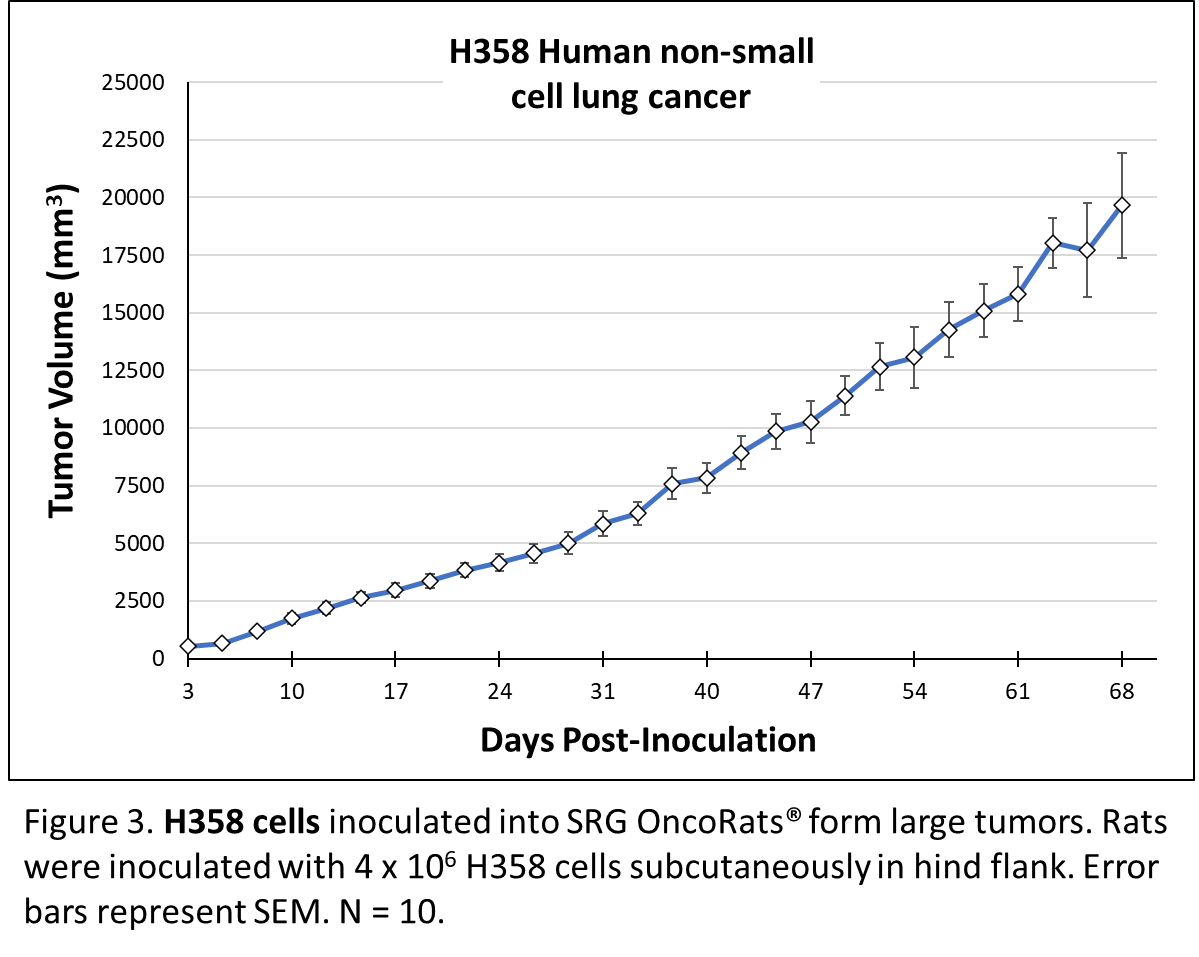 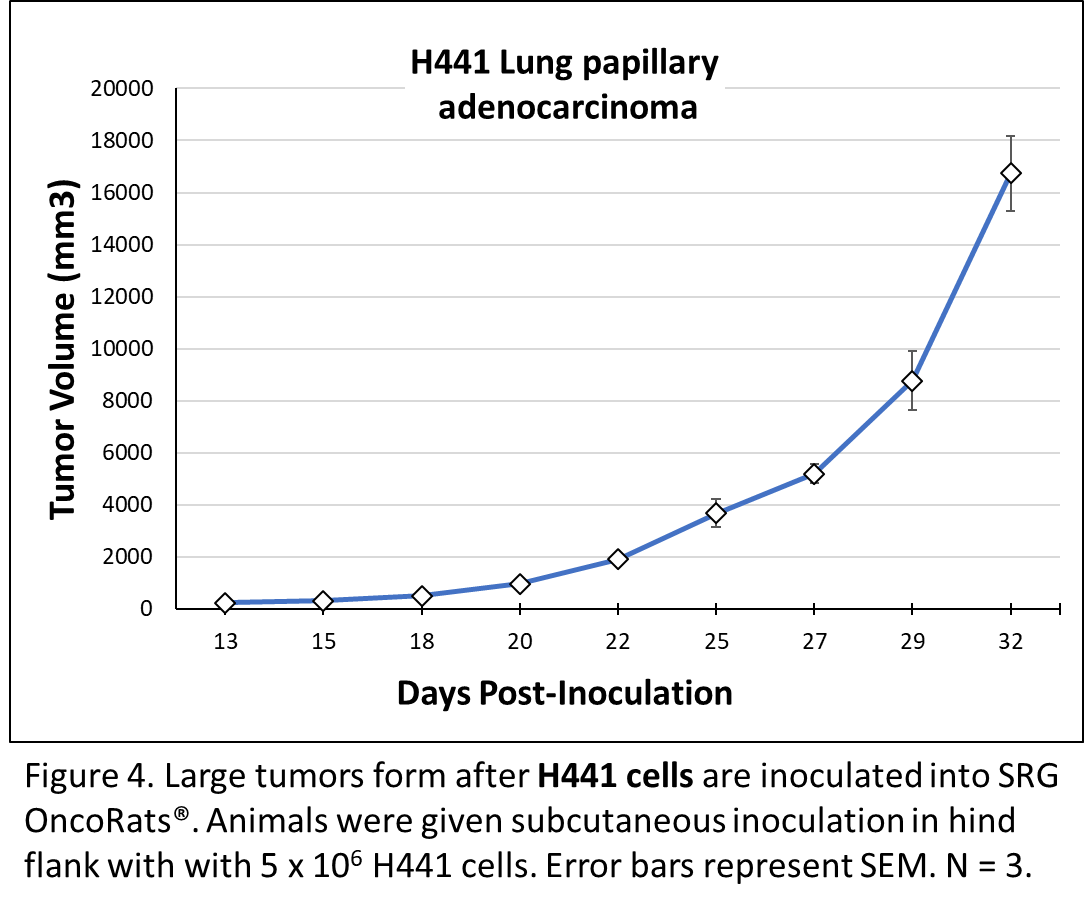 HCT-116 human colon cancer cells display epithelial morphology and have been extensively characterized in proliferation, tumorigenicity, and drug screening studies. In vitro, HCT-116 are highly motile and subcutaneous xenografts in nude mice have demonstrated them to be highly tumorigenic9. When grafted into the SRG OncoRat®, tumor take rate was 100% and tumor volumes reached 1800 to 12,000 mm3 by 24 days post-inoculation. When equal cell volumes were inoculated into NSG mice and SRG OncoRats® tumors were roughly 5-fold larger in the rats (figure 5)5. 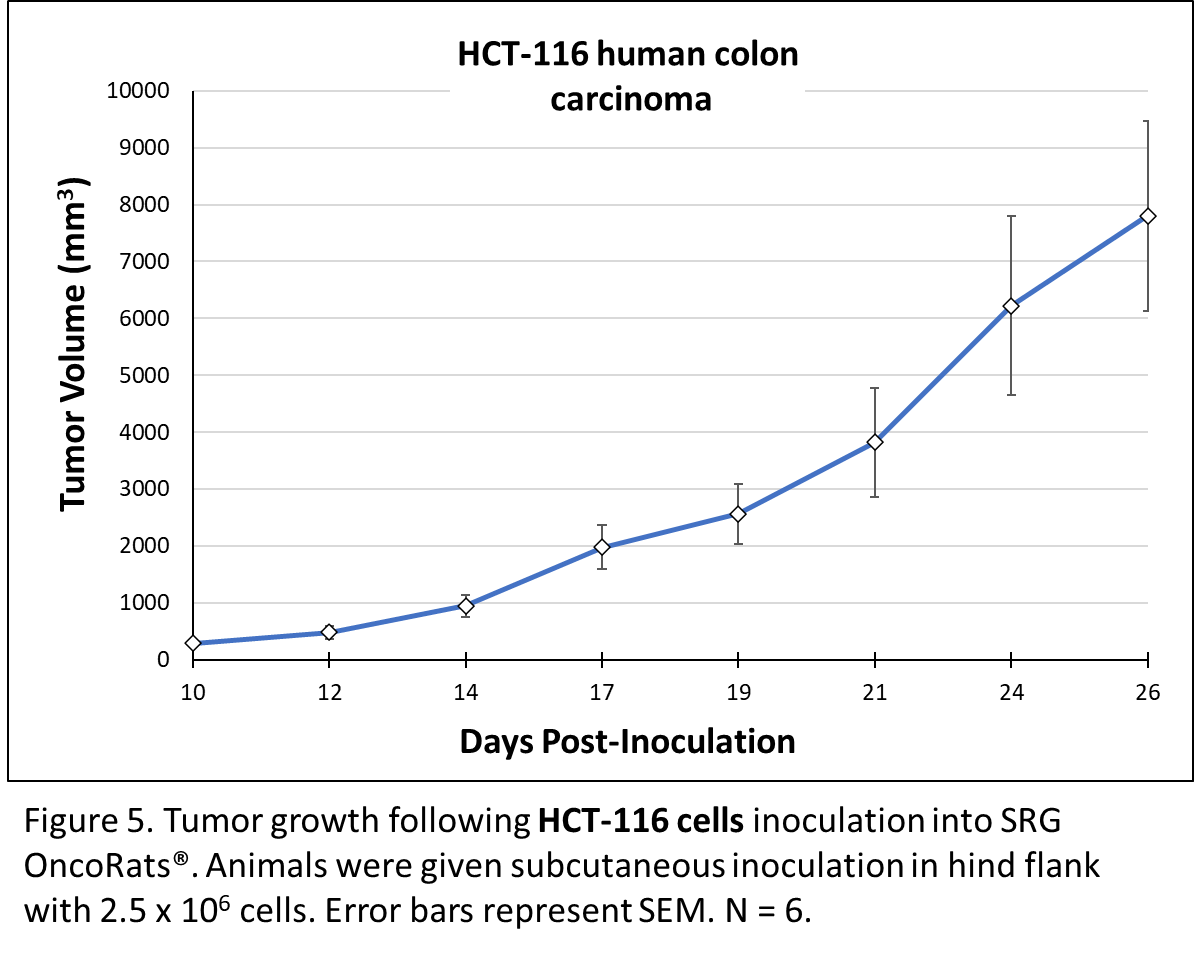 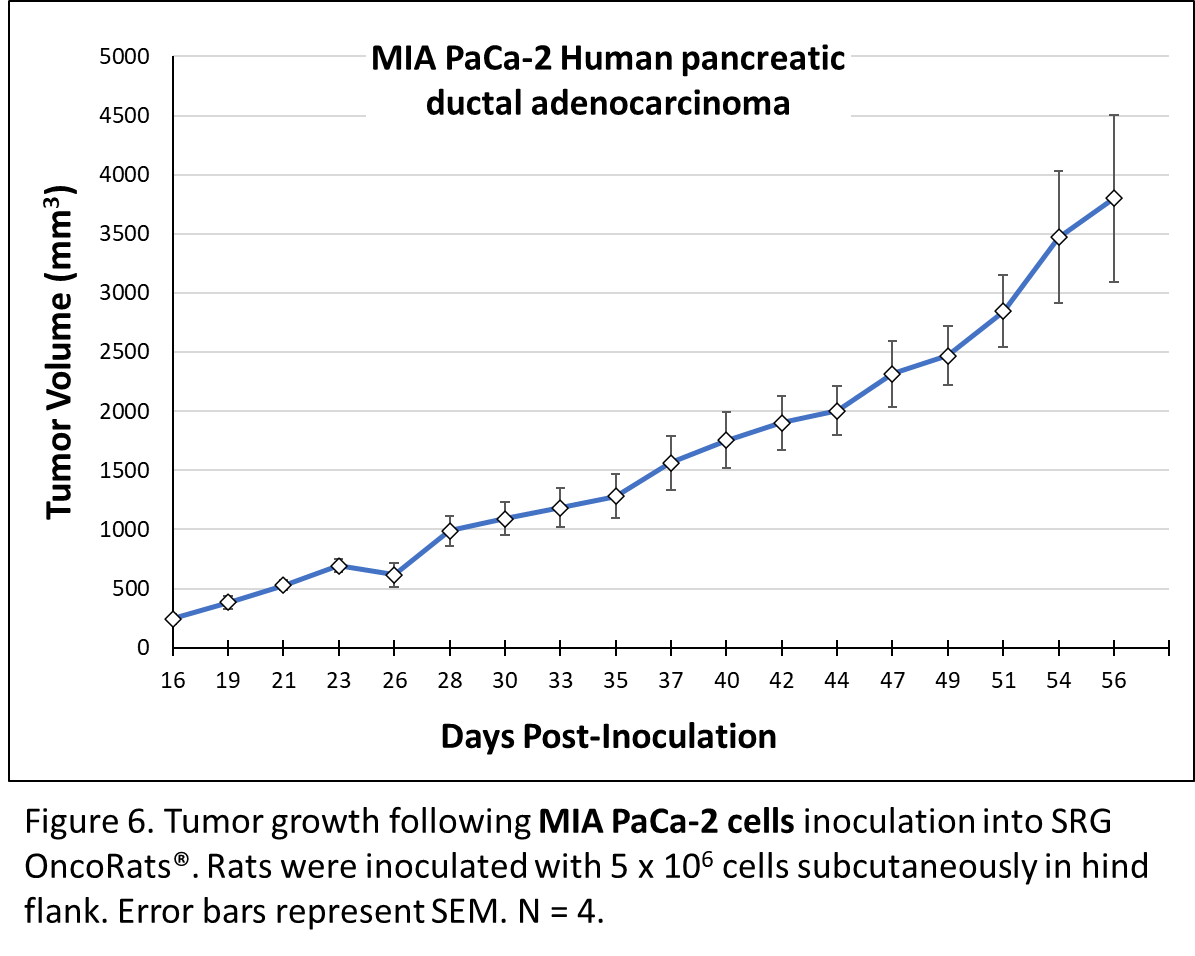 The SRG OncoRat® is a powerful tool for in vivo oncology studies, as it performs better than mouse models in several key ways. Our rats are extremely well-suited for hosting PDX and CDX cancer lines for analyses, including drug efficacy, tumor growth kinetics, and PK/PD studies. Tumor volumes are far larger than those obtained in mice, allowing for more detailed molecular characterization of tumors as well as PDX banking.

These qualities also make the SRG OncoRats® attractive candidates for use as patient avatars, wherein
personalized precision therapies can be rapidly tested in vivo to guide clinical decision making.

If your preclinical studies could use a boost, or you would like to see more data on the SRG Rat, contact Hera BioLabs for more information here.