While advances in in-vitro platforms have allowed researchers to better visually monitor a variety of aspects of tumor biology, a significant limitation of 3D cultured models for patient therapeutic monitoring or “patient avatars” is the lack of important components, such as the influence of surrounding tissues and potential cell-to-cell interactions, when studying cancer progression, treatment responses and outcomes. Patient derived xenograft models or PDX models overcome these limitations and other research challenges and provide a platform that is believed to more closely mimic the patient tumor.

And while mouse PDX models have seemingly become the standard for drug efficacy studies, there is increasing momentum to revisit the original murine model: the rat. Once abandoned due to the difficulty in achieving viable genetically engineered strains, the rat PDX model is gaining popularity in the research community. Not only is the rat more physiologically similar to humans, but it also offers technical advantages when it comes to PDX modeling.

Engraftment efficiencies are much higher in rats. Hera Biolabs’ Vice President of Research and Development, Tseten Yeshi, points to non-small cell lung cancer (NSCLC) tumors as a prime example, in the recent Drug Discovery News (DDN) Special Report on Cancer: Aiming for Avatars,1 where the engraftment rate is approximately 25% in mice but approaching 90% in rats.

Using its toolbox of cutting edge gene-editing technologies, including the Cas-CLOVER™, a CRISPR-based system and the PiggyBac™ transposon technology, Hera has developed a new genetically modified rat strain, the OncoRat which facilitated the creation of superior rat PDX models. The OncoRat provides a shorter timeline to produce more PDX models from patient samples, providing for PDX collections that are more representative of the patient population as well as reducing failure costs.

In order to fully understand and appreciate the benefits associated with these significantly elevated engraftment rates found in rat PDX models, it is important to consider research surrounding rare tumor subtypes and tumor progression and treatment responses in minority patient populations – especially as there is a growing recognition that the characteristics and mutational backgrounds of tumors originating from the same type of cancer can vary greatly by geographic location, race and ethnicity.

The National Cancer Institute (NCI) recently contracted Hera to generate and characterize PDX models of NSCLC tumors from patients in specific minority populations. When dealing with rare cancer types or a unique cancer presentation in a specific minority group, where the opportunity to create a PDX model is extremely limited, the OncoRat is ideal due to the high engraftment rate, as the risk of failure associated with low mouse PDX model engraftment rates is significantly reduced.

The substantial difference in tumor growth kinetics between mouse PDX models and rat PDX models is also noteworthy. According to Yeshi, from the same amount of starting material, a rat tumor may reach 30,000 mm3, whereas a mouse tumor may only reach at tumor may reach 2,000 to 3,000 mm3. This means savings of time and money for researchers, as first generation rat PDX models can create enough material to begin efficacy assays, unlike their mouse counterparts which would take three to four generations to produce sufficient tumor volume.

Generating PDX models using the OncoRat cuts timelines down significantly versus similar mouse models. This results in PDX models that are more reflective of the patient sample due to less time and passages. Furthermore, PDX data suggest that OncoRat maintains patient tumor heterogeneity and stromal cells even after multiple PDX passages. 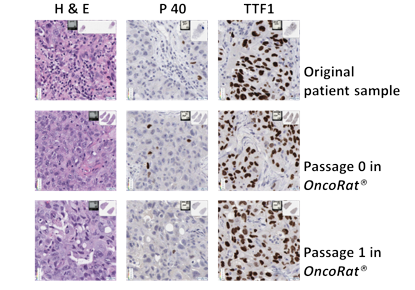 Representative images of staining of tumor samples at serial passages. The slides show the heterogenicity of the tumor is maintained through passages in the H & E. All the passages are P40 negative while all serial transplants are TTF1 positive confirming all passages as the adenocarcinoma of the lung with the OncoRat® maintaining the staining pattern through passages.