In this article we discuss our proof-of-concept (POC) data in mouse embryos and the apparent advantages that Cas-CLOVER may have over the popular CRISPR/Cas9 for animal model gene editing. The CRISPR/Cas9 platform has been a staple in the animal models community, however Cas-CLOVER has recently been shown to have multiple advantages including larger deletions, a lack of off-target effects, and clear freedom-to-operate (FTO) under our issued patents.

In comparison, both technologies create a DNA break and travel down one of the DNA repair pathways, either Non-homologous end joining (NHEJ) or homologous recombination (HR). When comparing CRISPR/Cas9 to Cas-CLOVER, there are two considerable differences among the platforms. Firstly, Cas-CLOVER tends to create much larger deletions which leads to full knockouts at higher frequency and overall easier screening. Secondly, Cas-CLOVER is dimeric in nature, resulting in higher specificity for the target region, so it lacks the off-target mutagenesis that commonly occurs with CRISPR/Cas9. This absence of off-target mutagenesis means shorter timelines with Cas-CLOVER, and no need to backcross to remove off-target disruptions, which saves development time (see figure below). 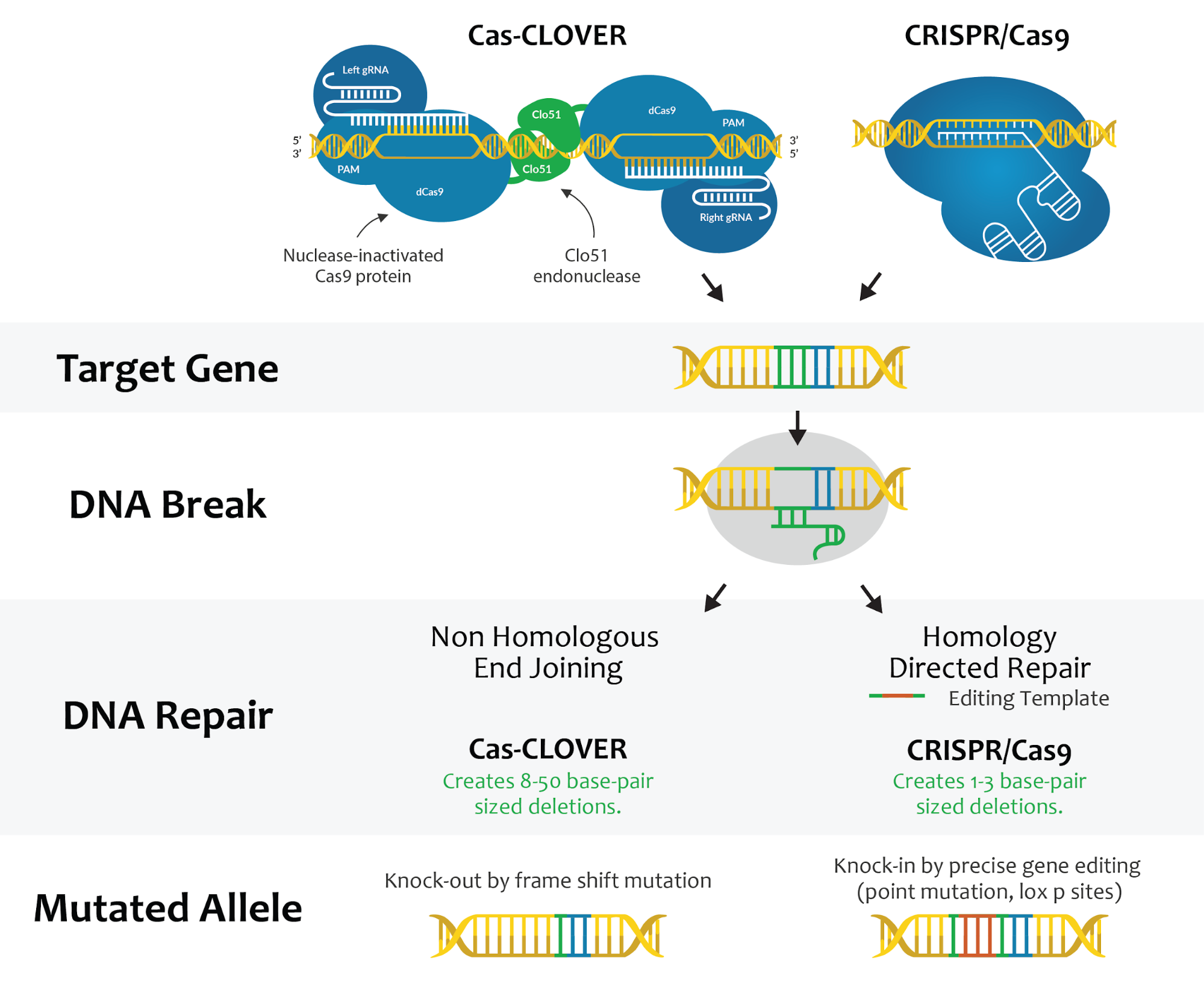 Cas-CLOVER has major advantages over CRISPR/Cas9

The advent of genetic engineering significantly changed the landscape for basic and translational research. Many years ago, homologous recombination in ES cells was used, and although powerful, it requires a lot of steps, and it takes significantly more time to produce a chimera than it does to produce a founder mouse using CRISPR/Cas9, or Cas-CLOVER. This approach is also limited to genetic backgrounds from which germline-competent ES cells can be derived. More recently, zinc-finger nucleases (ZFN) were developed which improved the success of genome engineering but are difficult to design and use.

In contrast, newer technologies like CRISPR/Cas9 and the Cas-CLOVER system have enhanced efficiency. CRISPR-based genome editing technology was rapidly adopted in the scientific community because of its major advantages — increased speed, reduced cost and a direct generation of mutants on a large variety of genetic backgrounds. In comparison to more traditional gene targeting, CRISPR/Cas9 does not require the use of ES cells or the construction of new ZFN proteins, and allows the introduction of mutations into virtually any genetic background, even existing genetically engineered models. However, the biggest drawback with CRISPR/Cas9 is the prevalence of off-targets, whereas Cas-CLOVER is industry leading in precision with very few off-targets identified in targeted deep sequencing and unbiased Guide-Seq approaches. Cas-CLOVER has comparable efficiencies to CRISPR/Cas9 and can be used directly in embryos, eliminating the time, cost and constraints associated with ES cells (see figure below).

Since teams can effectively introduce targeted mutations into virtually any genetic background with Cas-CLOVER, even existing genetically engineered models, it creates a powerful platform for generating new rodent models.

Unfortunately, DNA cleavage activity of CRISPR/Cas9 endonucleases can lead to off-target mutations and chromosomal translocations (Cho et al., 2014). CRISPR/Cas9 cannot differentiate a single base pair mismatch and will bind and cut those off-target sites. While looking at predicted off-target sites Cho et al. also describes induced indels at frequencies that ranged from 1.6% to 43% at off-target sites that carried a single-base mismatch. One option to decrease these mutations is using a modified Cas9 with a nickase mutation that reduces non-specific genomic damage caused by the enzyme. Though a good idea, these services are difficult to find. In addition, the “nickase” does in fact have off-targets. Unlike nickase and Cas9, Cas-CLOVER is a truly dimeric system with nearly undetectable off-target mutations.

Regarding mouse model creation timelines, with Cas-CLOVER the founder animals would be born 3 weeks after injection, and can be set up for germline breeding around 12 weeks post injection. Heterozygous N1 animals carrying the desired mutation can thus be generated in as little as half a year. 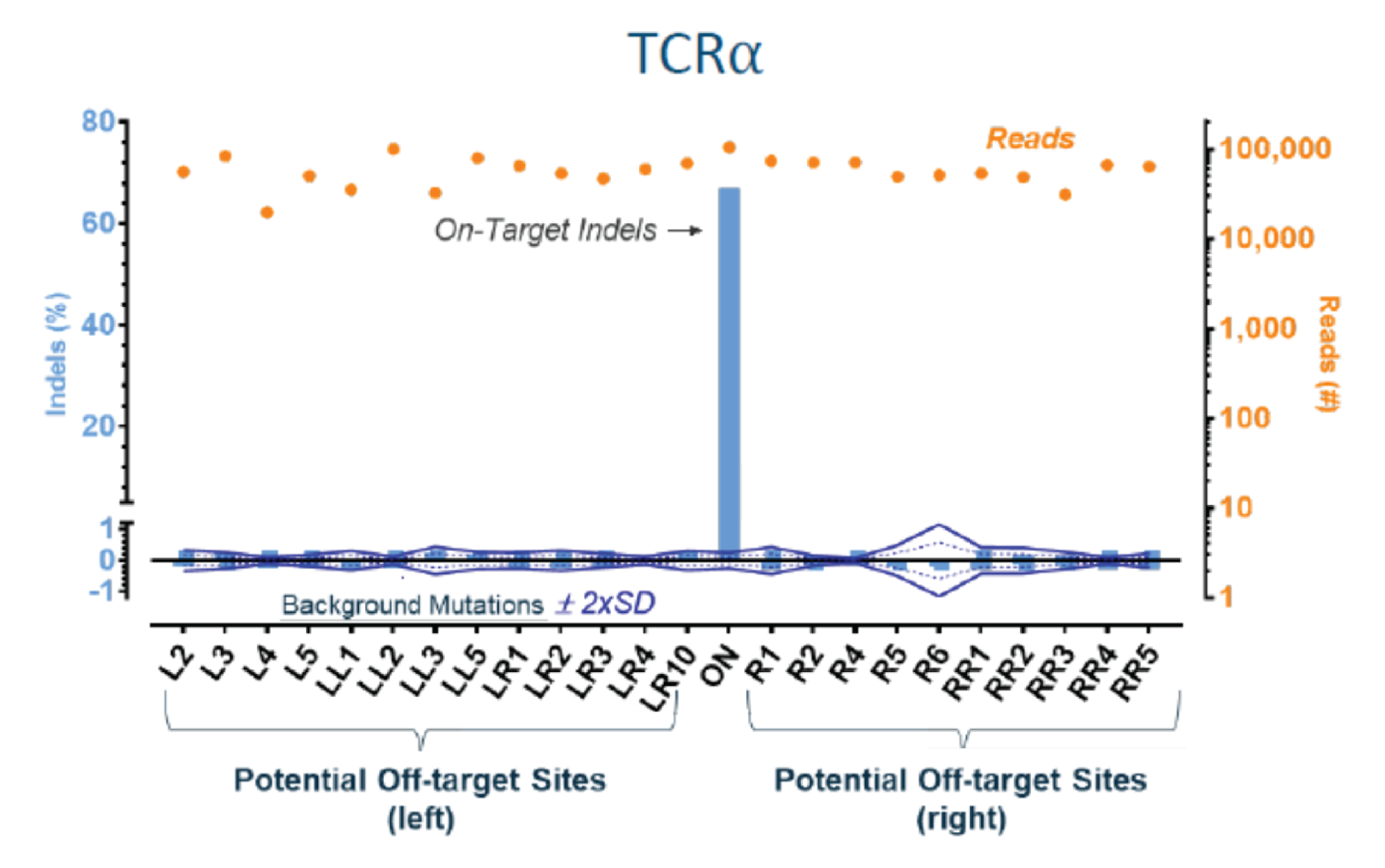 Using the same off-target analysis approach as Cho. et al., Cas-CLOVER demonstrates absolutely zero detected off-targets with deep sequencing (see figure above). In conclusion, we believe that using Hera’s Cas-CLOVER services will result in a more robust and accurate model generation with time savings of up to 32 weeks (see figure below).

Learn how Cas-CLOVER can benefit your animal model research

Our Cas-CLOVER technology and CRO services can optimize your workflow while maximizing the quality of your research. Our team would love to discuss your options with our technologies. If you’re interested in learning more, please contact us here.