Ovarian cancer is the most lethal gynecological cancer in the United States. Advances in cytotoxic, platinum-based chemotherapeutics combined with tumor resection surgery allows approximately 80% of these patients to achieve remission. Unfortunately, the vast majority have a tumor recurrence within 12-24 months and relapsed ovarian cancer is recognized as being universally incurable1-2.

Ovarian tumors have a high degree of cell-population heterogeneity and also contain populations of cancer stem cells (CSCs) that contribute to growth and drug resistance in these cancers. It has been demonstrated that exposure of ovarian cancer cells to chemotherapeutics induces a gene expression program increasing cell-stemness, including the expression of CSC marker. For this reason, it is incredibly important that ovarian tumor models mimic the disease physiology in the patient as much as possible.

To leverage and study the natural heterogeneity of ovarian tumors, the DiFeo lab, lead by Dr. Analisa DiFeo, took resected high-grade serous ovarian cancer (HGSOC) tissue from a patient and established a patient-derived xenograft in a murine host – designated OV81. The importance of OV81 is that HGSOC tumors make up around 70% of the ovarian tumors diagnosed. Additionally, OV81 is cisplatin-naïve, so the tumor landscape is unchanged by chemotherapeutic treatment and the tissue taken is the best representation of the patient’s tumor.

Further examination of drug resistance development will require study replication and expansion into an in vivo xenograft model. OV81.2 cells were implanted into the OncoRat® and NSG mice. After three weeks of growth, the tumor xenografts in the OncoRat had grown to volumes nearly ten-fold higher than the NSG mouse. This demonstrates that the OncoRat is the ideal xenograft host for OV81.2 cells for further preclinical study of this important cell line. 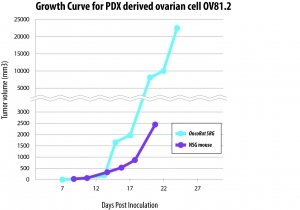