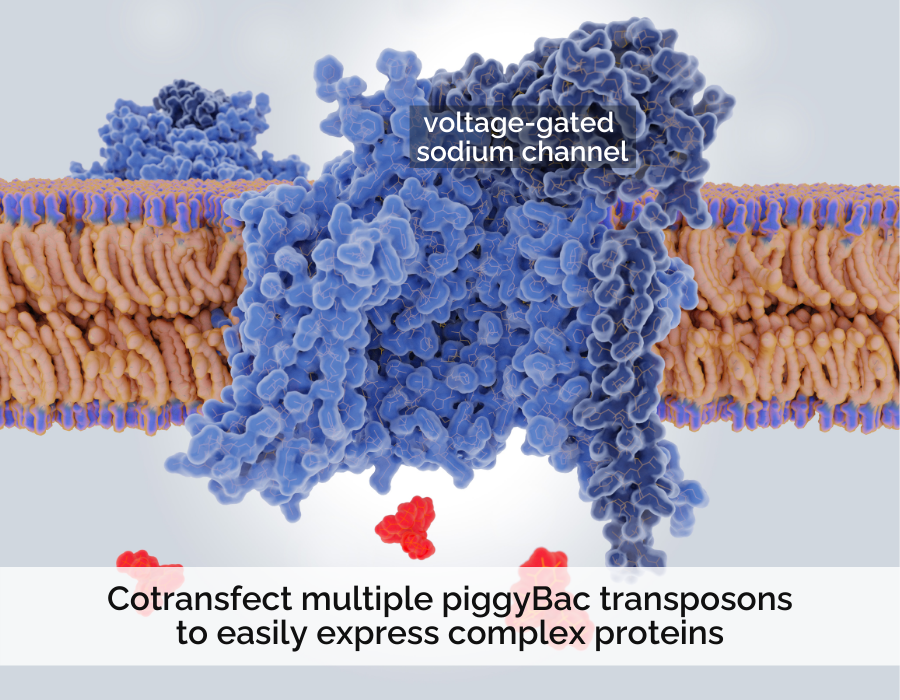 One of the most widely used approaches in biotechnology and drug development is the generation of cultured human cells that can stably express one or more recombinant gene sequences for further studies. As we have seen in the past, conventional methods are never that efficient and have major limitations as far as engineering cells to co-express transgenes or multi-protein complexes. Enter the piggyBac transposon system.

Cotransfection of three large piggyBac transposons, up to 10.8 kb, generated a heterozygous SCN1A stable cell line that was able to express two separate alleles of the pore-forming subunit and two other accessory subunits. The four sodium channel subunits had robust functional expression, concluding that the piggyBac transposon system is a very valuable tool. piggyBac technology can be used to perform multiplexed stable gene transfer, and has the potential for application requiring concurrent expression of multiprotein complexes.

In this study, the research group tested the capabilities of the piggyBac system to concurrently and stably transfect cells with more than one transposon. To test for efficiency, HEK-293 cells were transfected with the piggyBac transposase (pCMV-piggyBac), pT-NeomycinR encoding resistance to the antibiotic G418, and either pT-Luciferase or a negative control of a non transposon plasmid encoding luciferase. Most G418-resistant cell colonies cotransfected with pT-Luciferase readily produced light upon luciferin application, whereas the negative control colonies did not.

Next, to test the integration of multiple transposons, HEK-293 cells were cotransfected with pCMV-piggyBac, pT-NeomycinR, pT-eGFP, pT-DsRed, and pT-CD8 and then selected for 3 weeks with G418 before quantifying eGFP, DsRed, and CD8 expression simultaneously with flow cytometry. In three independent experiments, results showed that 31± 3% (mean± SD) of G418-resistant cells coexpressed eGFP, DsRed, and CD8, thus proving simultaneous expression from four separate transposons in human cells using only a single transfection and selectable marker. [1]

The researchers then evaluated the utility of piggyBac mediated multi-transposon delivery by creating cell lines that stably expressed a human brain voltage-gated sodium channel complex. They used three separate transposons to hold two alleles of the pore-forming subunit and the two accessory subunits, as well as puromycin and neomycin resistance genes. Only the cells transfected with all three plasmids exhibited large numbers of resistant clones (see figure below). 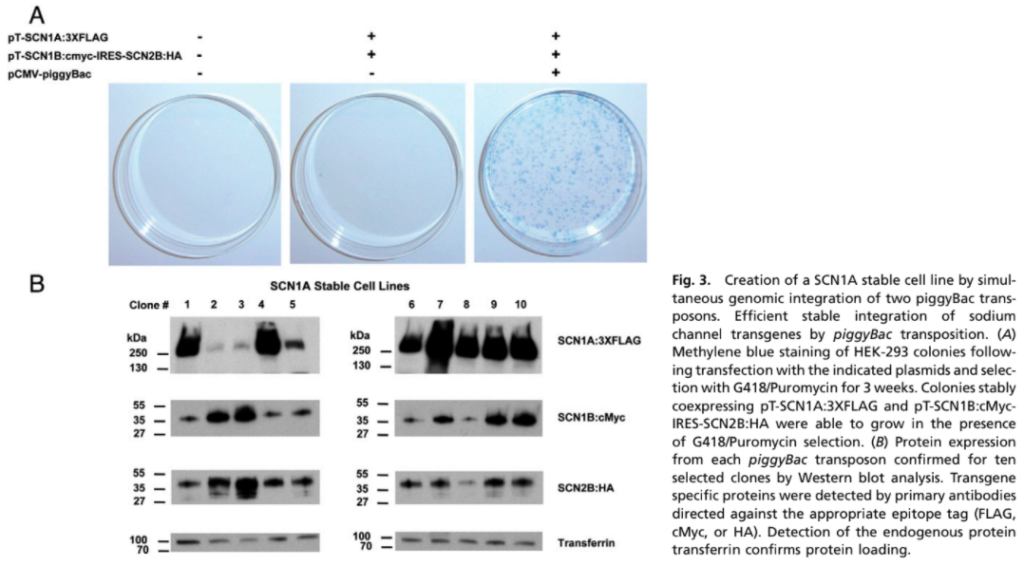 When plating the equivalent numbers of cells, cotransfection with the piggyBac transposase yielded 650 clones that were resistant to both G418 and puromycin. In contrast, transfection without transposase yielded a single colony, indicating a 600-fold increase in generating stable cells expressing the sodium channel when using piggyBac. Overall, these results demonstrate the increase in efficiency with generating multiple-subunit stable cell lines using the piggyBac transposon system.

Fig. 5A illustrates an array of sodium recordings at passages 4 and 38 in response to step depolarizations from a holding potential of −120 mV to between −80 and +20 mV. Average current density recorded at passage 4 was −402±64 pA∕pF (n = 27), which was not significantly different from the traditional patch clamp. The peak current density-voltage relationship (Fig. 5B) and activation curve (Fig. 5C) for the voltage-gated sodium current expressed by stable cells at passage 4 were indistinguishable from data collected using manual patch clamp. The sodium current density measured at passage 38 was 522±82 pA∕pF (V ½ = −20.3±2.2 and k=6.1±0.5, n=21), further supporting the stability of piggyBac-mediated integration. Additionally, there were no statistically significant differences between data recorded at passage 4 and passage 38. This data suggests that the stable cell line generates voltage-gated sodium currents that are suitable for high-throughput electrophysiology and even further drug discovery efforts. 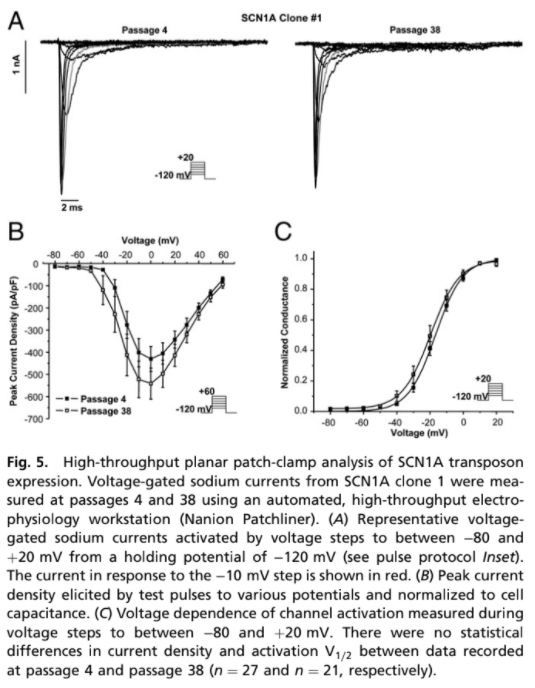 Recent investigations have resulted in multiple piggyBac integrations when delivering a single transposon, but in this study, the research team quantified the capabilities and robustness of piggyBac to mediate the stable integration of four independent transposons concurrently in human cells. From this stable cell lines were generated with this technology thus expressing heteromultimeric voltage-gated sodium channels that exhibited a flexible functional expression of up to four different subunits.

These results have great potential for cell line generation with stable expression of multiprotein complexes. The efficient and stable integration of up to four separate piggyBac transposons in human HEK-293 cells is a major accomplishment. This technology has great potential for enabling genetic engineering of cellular models for use in drug discovery applications targeting multiprotein complexes, for production of an array of multiple recombinant proteins, and for treatment of genetic disorders that require more than one transgene delivered.

Speak with Hera to learn more about cell line engineering services or acquiring rights to our gene editing technology for making cell lines yourself. We also offer highly accessible commercial licenses as well.

Learn more about our piggyBac transposon system by contacting us today!