Hera is offering evaluations opportunities for Cas-CLOVER, which can convert into full research licenses with very accessible terms, including options for single-time payments with no royalties

Gene editing systems such as ZFNs, CRISPR/Cas9 and now Cas-CLOVER bind to the target DNA and generate insertions and deletions (“indels”) resulting in “knockout” mutations or targeted “knock-ins” when supplied with a homologous recombination vector. If the indel frequency is determined to be high enough by sequencing, only a small set of cells need to be screened and cloned in order to identify edited cell lines, greatly increasing efficiency and decreasing timelines.

Hera BioLabs is a gene editing technologies and preclinical research services company introducing the Cas-CLOVER technology for use in drug discovery and early development. Unlike CRISPR/Cas9, which is a monomeric nuclease targeted by a single guide RNA, Cas-CLOVER is a dimeric nuclease system targeted by 2 guide RNAs with no detectable off-target mutations (1).  Hera BioLabs has straight forward licensing options, with issued IP and clear commercial freedom to operate.

Targeted nucleases can advance drug discovery steps such as target identification and validation through the development of cell-based assays and genetically engineered models (GEMs). One example is Hera’s development of the SRG OncoRat. The Sprague Dawley rat model was engineered to contain a knockout in both the Rag2 and IL2rg genes resulting in a fully immunodeficient rat. Dozens of human tumor models have been validated in the OncoRat, including a prostate cancer model recently published in a top tier drug development journal (2). Having a natural specificity advantage, Cas-CLOVER may be especially useful for cell and gene therapy research where off-target mutagenesis is unacceptable. Impressively, cell surface markers associated with graft versus host disease (GVHD) were successfully targeted by Cas-CLOVER in both proliferating and resting human T-cells (3).

Dimeric Cas-CLOVER works by using two guide RNAs targeting “half-site” sequences and cuts the spacer region between the two half-sites with the proprietary dimeric Clo51 nuclease. The specificity of Cas-CLOVER relies on the stringency of the dimeric Clo51 nuclease. The spacer region between the guides is ideally 16-30 bases enabling ease of design for targeting just about any gene of interest (1).  Further, using Next Generation Sequencing (NGS) in human T-cells edited with Cas-CLOVER, no off-target mutations were observed at other single gRNA or mis-matched gRNA combination sites in the genome.  See histogram below showing no off-target indels analyzed with 30,000 –100,000X coverage (i.e., PCR amplification reads). Possible combinations of mis-matched gRNAs with Cas-CLOVER are shown below the histogram. 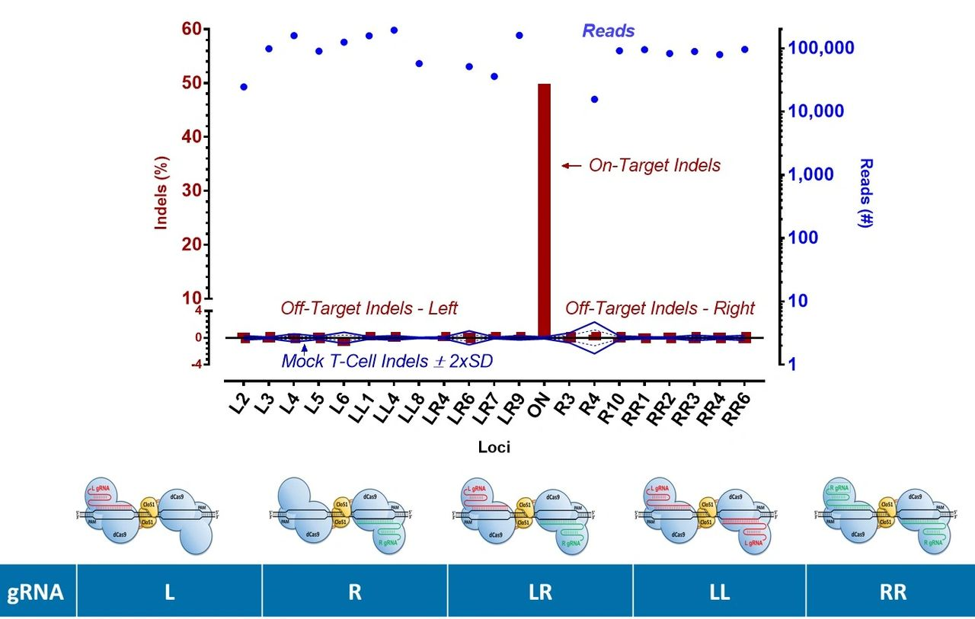 Due to the specificity of Cas-CLOVER, indel frequency can be increased by multiple rounds of targeting at one locus without introducing the risk of unwanted off-target mutations. Genes in the commonly used Chinese hamster ovary (CHO) cell line were targeted and generated indel frequencies of 15-26% and 18‑43% for one and two rounds of targeting, respectively. These on-target frequencies in CHO cells are comparable to CRISPR/Cas9 and higher than reported for ZFN. Indel frequencies and the deletion sequences in CHO cells targeted with Cas-CLOVER are shown below.

As depicted below, the monomeric CRISPR/Cas9 nuclease system contrasts with Cas-CLOVER as it is directed to target sites with a single gRNA. 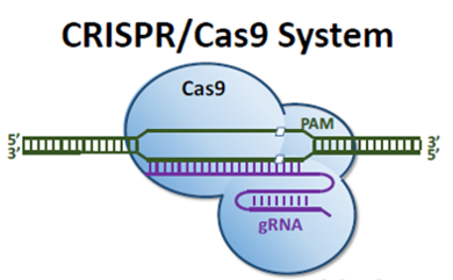 The single gRNA of Cas9 is known to bind and cut sequences that contain multiple base-pair mismatches, elevating the risk for off-target mutagenesis. In CHO cells, a single guided Cas9 screen revealed off-target mutagenesis of as high 10.7%; with 3 of the 4 off-target sites screened containing mutations (4). This lack of fidelity with CRISPR/Cas9 may require off-target testing to ensure the target and phenotype are linked. On the other hand, Cas-CLOVER users can be assured that off-target effects are limited due to the specificity of this unique dimeric system.